A few days ago we received a “Give Em Props!”
entry from Other in Canada that spoke about how Other was influenced by an
American artist named buZ Blurr.  Following a bit of research on the web, we
became absolutely fascinated by buZ Blurr and his long history of boxcar art. We
shot him an email and was pleasantly surprised to learn that not only did buZ
blurr know of the Wooster site but that he was more than amenable to chat with
us. Here’s what he had to say:

Age: 60. I’m really Old Skool,
having recently retired from the railroad after 41 years of service. />Hometown: Lafe, Arkansas
Where do you now
live?: Gurdon, Arkansas, although I prefer to call it Surrealville,
Principality of buZ, as the origin of my boxcar icon dispatch, and issuing
authority for my artistamp works and mail art. A fantasy realm as equilibrium
device to retain my sanity or practice insanity.
How long have you
been creating street art?: Don’t know if the practice of marking on
railcars qualifies for street art, but I first started on Nov.11, 1971.  The
folk art tradition of chalking monikers on the traveling billboards of the
freight trains dates back to the 19th century, when hobos and rail workers
broadcast their presence in the vast network. I followed this tradition by
fashioning my own icon for quick application and easy recognition, and plying
the obsessive numbers game of dispatch. Anonymously sending obscure cryptic
messages as caption to the icon as Zen Koans to ponder.
What did
you do last night?: Answered some correspondence.
What is
your favorite thing to eat for dinner?: Unfortunately, steak and
potatoes.
Who is your favorite fictional character?: T.S.
Garp, or perhaps href="http://www.geocities.com/Hollywood/4953/trout.html">Kilgore Trout. /> 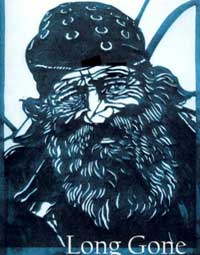 align="right">What do you currently have in your pockets?:
Right front jeans pocket, some change and a pocket knife. Left front pocket, a
Canon camera . Left back pocket, a billfold. Right back pocket, a handkerchief.
Shirt pocket, two ballpoint pens.
If you were given “more time”,
what would you do with it?: Given I’ve recently retired and supposedly
have more time, I have to constantly face the choices of doing the things I said
I would do if I had the time. I’m prone to fritter away time trying to decide.
Should I drive around to nearby yards to mark the cars? Should I do mail art in
hopes of some feedback? Should I work on larger stencils from fantasy collages?
Should I do more stencils to spray through on the railcars? Should I commit the
spray to canvas, or reduce the imagery to stamp size and do a stamp sheet? The
railroad men have an axiom for retirement; Running out of time and money. />Who do you love?: Emmy S. Butler, nee Blanton.
/>

Wooster: How
did you get started in creating art for the street?

src="http://www.woostercollective.com/images/buzbl1.jpg" align=
"left">buZ blurr: Provided freight monikers are defined as
street art, given they can be seen at road crossing, the appeal of the transient
imagery was the mystery of who the authors of these icons and doodles might be,
and the most prevalent ones such as Herby, The Rambler, Water Bed Lou, the 3rd
generation Bozo Texino, and others guardedly protected their anonymity knowing
that mystery created a legend. Tuscan Red Legends. The seemingly omnipotent
presence of these icons and logos riding the rails out in a vast network
anonymously was my primary inspiration to ply the trade, and create my own. The
outlaw nature of the work, counter to the rules of the railroad I worked for,
also demanded my own anonymity, for I was endangering my livelihood, despite the
need of artists to
proclaim their work.

buZ blurr: Because of my
occupation as brakeman for the railroad afforded me access to the railcars. />
Wooster: What other street artists do you most admire
and why?

buZ blurr: I really admire Logan Hicks,
for his incredible attention to detail in his multiple stencil work. Other for
his fantastic draughtsmanship, in blending paintstiks to convey imaginative
subjects. Labrona for the mysterious quality of his drawings. I like Broke for
variety. The Solo Artists for the amazing number of images out in the network,
and adhering to the tradition, plus his use of language.
/>Wooster: What’s your favorite city, neighborhood, or block,
to post and/or see street art?

buZ blurr: New York
City, Lower East Side, corner of Ludlow & Rivington, southwest side, since there
is a stencil dispatch of mine as truly authentic street art, placed there while
I was in the city the month of August. At least E.F.HigginsIII, who has a
temporary gallery at 149 Ludlow says it’s still there. I also did some flyer
postering on Wooster Street from Canal all the way to Houston announcing my show
up in Chelsea at 504 W. 22nd Street. A lame attempt to get back some street cred
, since the expensive Whoop De Doo gallery scene was a sparsely attended
mistake.

Wooster: What inspires you now?
/>buZ blurr: Photography, and stencils.
/>Wooster: What are you currently working on? Can you give us a
sneak peak?

buZ blurr: I make a four copy edition of
a bookwork, documenting our lives, utilizing the cheap graphics of photocopies,
inkjet and color electrostatics copying, and Velo binding as Christmas gifts for
my three kids. No, you can not have a peak. I’ve destroyed enough myths with my
admission to being a graffiti culprit, and you would not be interested in the
images from the mundane life of an old square.