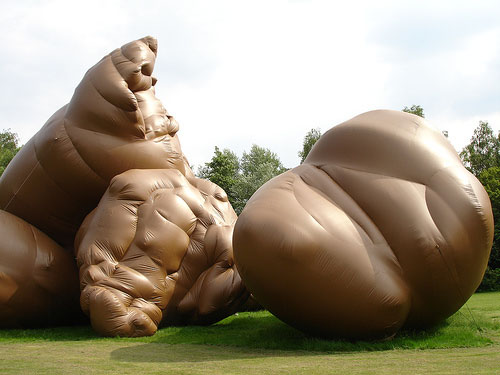 “GENEVA (AFP) — A giant inflatable dog turd by American artist Paul McCarthy blew away from an exhibition in the garden of a Swiss museum, bringing down a power line and breaking a greenhouse window before it landed again, the museum said Monday.

The art work, titled “Complex Shit”, is the size of a house. The wind carried it 200 metres (yards) from the Paul Klee Centre in Berne before it fell back to Earth in the grounds of a children’s home, said museum director Juri Steiner.

The inflatable turd broke the window at the children’s home when it blew away on the night of July 31, Steiner said. The art work has a safety system which normally makes it deflate when there is a storm, but this did not work when it blew away.

Steiner said McCarthy had not yet been contacted and the museum was not sure if the piece would be put back on display.”

(Thanks, a low roar”