It’s been a crazy 24 hours since we posted the Banksy photographs
yesterday morning.

One thing we thought we’d share with you this
morning, is an email exchange that we helped coordinate between Randy Kennedy, a
writer for the New York Times, and Banksy.

(If you haven’t seen it
yet, the photo of Banksy placing his piece in the Metropolitan Museum of Art was
published on the Front Page of today’s NYT) 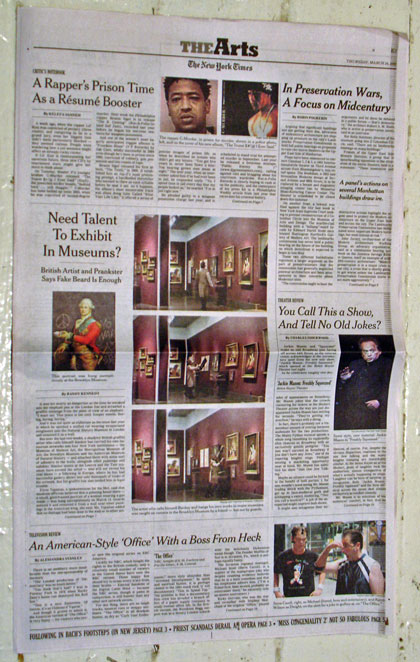 So while a couple of these quotes made it
into today’s paper, here’s the full exchange…

1. is this
the first time you’ve installed works of your own in new />york museums?
In New York, yes. Before this my paintings
have only been exhibited in the
Tate gallery in London and the Louvre in
Paris. Then they took them down.

2. why did you choose the
four you chose?
I went for the biggest four museums in New York, I
wanted to do the
Guggenheim but there weren’t enough paintings in it, I
would have had to
appear between two Picasso’s and I’m not good enough to
get away with that.

3. were the works you installed all
paintings on canvas?
Two of the works were fine
oil paintings. I vandalised them so they had
some actual meaning. In the
Natural History museum I installed a real dead
beetle but with model
missiles and satellite dishes stuck to it. A bug in
the true American
spirit.

4. how did you attach them to the wall? />I was careful to attach them in a way they wouldn’t fall down by
themselves.

5. what message, if any, were you trying to
convey by putting up these
works?
I’ve
wandered round a lot of art galleries thinking ‘I could have done that’
so
it seemed only right that I should try.

These Galleries are just
trophy cabinets for a handful of millionaires. The
public never has any
real say in what art they see. Its good to screw with
the selection process
sometimes. ‘Comfort the disturbed, and disturb the
comfortable’ as Eleanor
Roosevelt once said.

The gas mask painting is about how fear of
terror is disfiguring society.

The military officer painting is
dedicated to all those who joined the
forces to fight honorable and just
wars, and ended up feeling like maybe
they should have stayed home and been
peace activists instead.

6. how did you put up the works
without being noticed by guards or
other visitors? was it
easy?
As a graffiti artist its harder to paint subway trains in
New York these
days than it is to paint your major public exhibition
spaces.
You just have to glue on a fake beard and move with the times. />
7. How did you manage to get the paintings into the
museums?
After reading 3 biographies on Harry Houdini