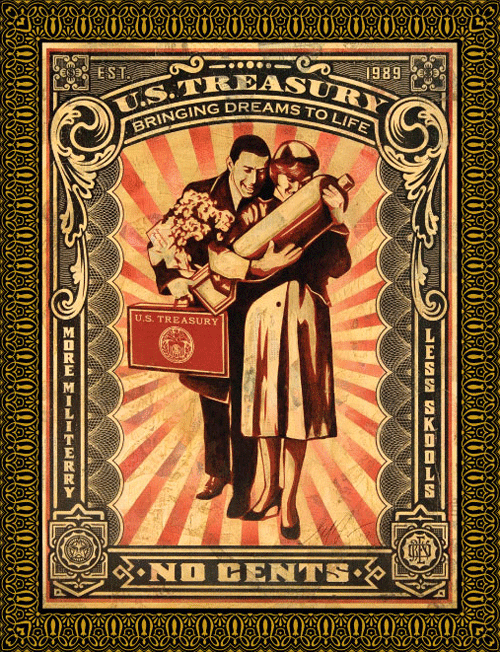 June is usually a great month for shows in New York, but this year is proving to be be exceptionally good.

Next weekend Shepard Fairey opens E PLURIBUS VENOM, his first full scale solo show in New York City.  The buzz on the show has been massive, as not only will Shepard be showing his new work at the Jonathan LeVine Gallery in Chelsea, but he’s also taken over a massive installation space in Dumbo, Brookly at 81 Front Street (at the corner of Washington St).

The opening reception for the Chelea show is next Saturday, June 23rd from 5-9 pm at the Jonathan LeVine Gallery at 529 West 20th Street.

Jonathan LeVine explains the new work - “The title E Pluribus Venom which translates Out of many, poison is derived from E Pluribus Unum (out of many, one) an early motto adopted by the U.S. Government which appears on U.S. coins and dollar bills.  Many becoming one, or a loss of power and influence of the individual in favor of homogeny is a symptom of a society in decline. “E Pluribus Venom” could be interpreted as saying both that there is poison in the American system, and that many individuals are motivated by venom and anger toward this system. “E Pluribus Venom” is comprised of artworks designed to question the symbols and methods of the American machine and American dream and also celebrate those who oppose blind nationalism and war. Some of Fairey’s works use currency motifs or a Norman Rockwell aesthetic to employ the graphic language of the subjects they critique. Other works use a blend of Art Nouveau, hippie, and revolutionary propaganda styles to celebrate subjects advocating peace. The art addresses monolithic institutional power and authority and the role of counter culture and independent individuals to question the dominant paradigm. Shepard Fairey’s new body of work contains politically-charged paint, screen print, stencil, and collage mixed media pieces which use metaphor, humor, and seductive decorative elements to deliver provocative but beautiful results. These works blur the perceived barriers between propaganda and escapist decoration, political responsibility and humor with the intent of stimulating both viscerally and intellectually”