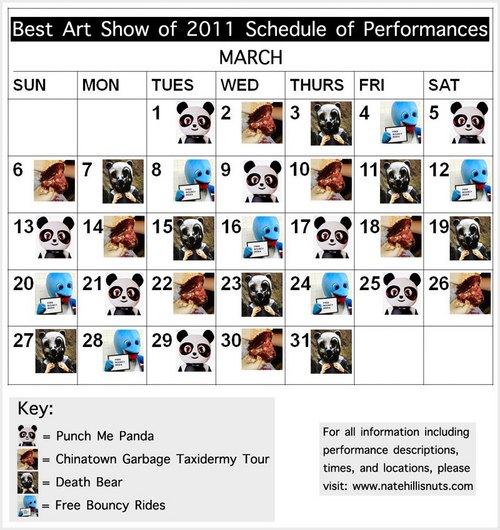 Every day during March in New York City, Nate Hill will be performing a rotation of his classic performance including Punch Me Panda, Death Bear, Free Bouncy Rides, and the
Chinatown Garbage Taxidermy Tour. The specific times and locations of the street performances will be announced on Nate’s website and twitter feed in late February.  Additionally, Death Bear and Punch Me Panda are available for house calls by appointment.

All performances are free.

Punch Me Panda: Man in panda mascot costume with chest protector who you are invited to punch to release frustration. Death Bear: Man in black bear mascot head with jumpsuit who you summon to your apartment to remove objects that are causing you pain.

Free Bouncy Rides: Man in dolphin mascot costume who invites you for a lap ride on a subway platform underground.

The Chinatown Taxidermy Tour: A guided look into the trash of Chinatown fish markets, and instructions on how your findings can be used for taxidermy.