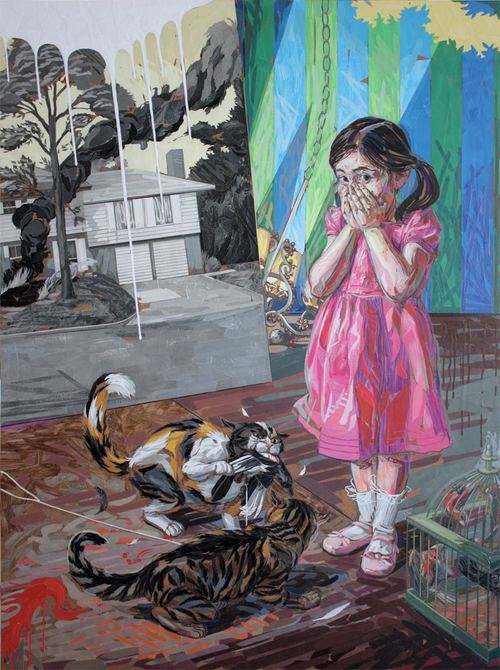 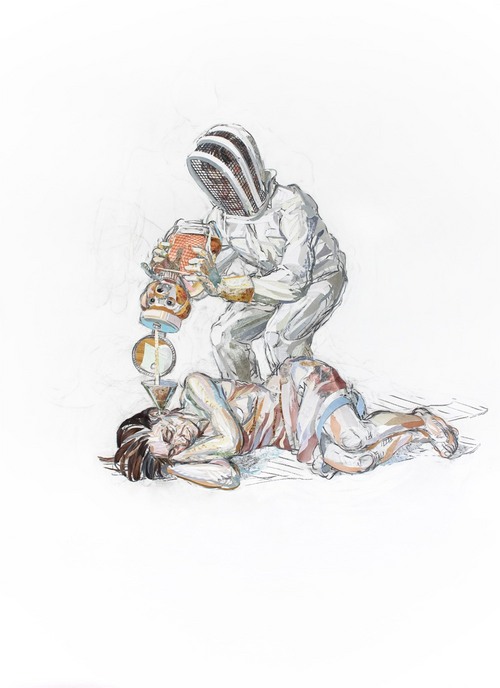 “For my first solo show in the UK, Due Date, I am exploring my preconceived notions of parenthood and the opportunities for growth that come through that process. I am presenting a series of narratives that flirt the line between fact and fiction; they are moments of autobiography that have been extrapolated to become allegories. As an artist in the process of trying to become a parent and living in one of the most parent-centric sections of NYC, I am keenly aware of the mania that strikes at the heart of parents young and old. In these paintings I am addressing fears (loss of individuation as well as of the proverbial unknown), the strengthening of bonds in times of crisis, the issues of trying to become a parent later in life and the wisdom gained through the process of parenting.

The work is divided into two groups: a set of images on panels, and a set of images on paper. In the more fully realized works on panel, all the actions are taking place in staged environments. The elements surrounding the figures are merely cardboard props, strictly for the purpose of giving the action of the figures a point of reference. The action of the figures is the reality of the image, everything else is just window dressing. The paint drips and splashes act as abstract gestures clearing things away yet never managing to obscure the events occurring on the stage. In the works on paper, the events being described are contained in a sea of white. By the very nature of the presentation the gestures and relationships are isolated and distilled.

The current body of work builds upon a process of art making that I have been refining for several years. I refer to the work as paper paintings rather than as collage. I see each piece of paper as a brushstroke rather than as a juxtaposed idea. Each brushstroke is selected for it’s color, value and texture, rather than it’s imagery.”