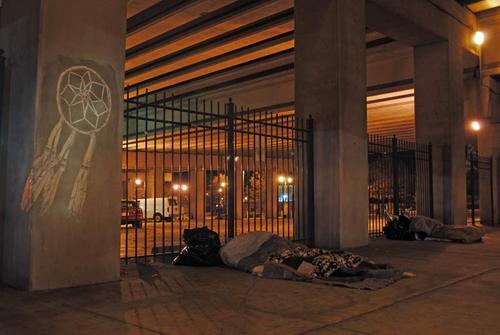 “This is the first in a series about empathy and homelessness. The idea is to draw dreamcatchers and put them up where homeless people sleep and go back at night to photograph them sleeping under it. My goal is in atlanta for the symbol of the dreamcatcher to become synonymous with empathy and gratitude. To see one outside even when no one is sleeping under it is to hopefully become thankful for what you have.

I got to talk to phil in the middle of putting this piece up. Hes been here for a long time and let me know that when the sun goes down thats where i can find him. We discussed the issue of homelessness and why atlanta is spending money on things other than a solution to housing them. I gave him a bottle of rum, canned food , some baked goods, and cigs. He insisted on shaking my hand even though it was covered in wheatpaste.

The next day when i was walking i saw him and he introduced me to his friend, gave me the biggest hug, and told me he loved me. Thats what its about. I could care less on how many views this gets my goal is already accomplished on a personal level. My hopes are to get a show built around a series of these and donate half of what i make to the specific person in the photo.”... Ola Bad