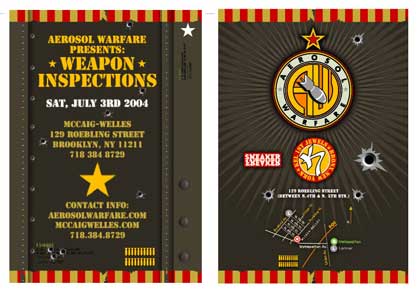 Purpose: To juxtapose fashion contra function. When designers in the fashion industry undertake new and fresh endeavors (hopefully desirable to mainstream youth) the question arises - ‘Should the article of clothing be more fashionable or functional?’ Unfortunately, and inevitably, the decision is made, the answer is given and the designs are made at the expense of one or the other. Aerosol Warfare’s Weapon Inspections hopes to blur the line between fashion and function so in the end both are indistinguishable within a particular article of clothing. We hope, with this show, to redefine that fine line so that an entirely new breed of Converse Weapons (as
contemporary art) takes the scene by storm. Is it fashion, or is it art?

Mission: Weapon Inspections challenges the individual artist by giving them a particular and specific canvas to work on (i.e. the Weapon). What new breed of art does a proposition and a show like Weapon Inspections bring about? While most artists are stubbornly accustomed to working on their personal mediums - be it canvas, metal, walls or sculptures - using the Weapon as a neo-canvas forces them to think outside the box. How many different directions can the Weapon and the art go? How does each artist interpret the Weapon, its form and layout and use it in conjunction with their own designs to create art? By pushing the envelope with the Converse Weapon, Aerosol Warfare hopes to successfully conceive an entirely different form of art that would have otherwise never been born and bring the Weapon to new audience with higher
visibility.

Forecast: Aerosol Warfare (through its Weapon Inspections) plans to reemphasize the connection between hip-hop culture, - which is currently becoming a measure for all that is mainstream - and style. With earlier generations, when hip-hop was first
developing, there was a strong emphasis on what shoe a person wore. It was the shoe that measured how mainstream a person was. How cool they were, or how ‘wack’ they were. Aerosol Warfare is placing the Weapon back into the hip-hop mainstream culture.

Implementation: Aerosol Warfare has invited cutting edge, well-known & underground artists from various disciplines - hip, DJ, graffiti - to craft art in a new arena : Converse Weapons. Each artist will then manipulate and transform the shoe utilizing their particular variety of artistic styles. This final product will then be collected and showcased in Aerosol Warfare’s Weapon Inspections show opening in New York City, Summer 2004.