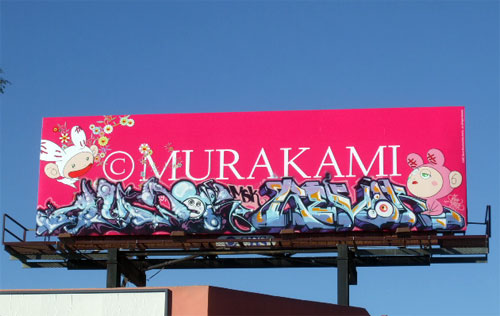 From the LA Weekly comes this terrific anecdote.

Last December, a massive billboard went up on Melrose Avenue to promote the Murakami exhibition at LA’s Museum of Contemporary Art.  Not long after it went up it was tagged by Augor and Revok of MSK and Seventh Letter Crew.  Less than 72 hours later the entire tagged billboard was gone.

It turns out that, after seeing a photo of it on the internet, Murakami himself liked the tagged billboard so much that he had it removed and shipped back to his Kaikai Kiki studio in Tokyo.

(via our friend Greg Allen)