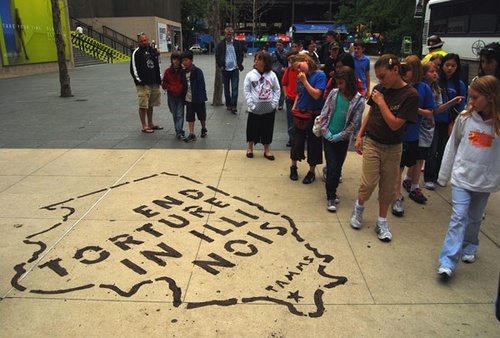 “On Saturday, June 6th in Chicago, local artists partnered with the Tamms Year Ten coalition to protest state-sanctioned torture at the supermax prison in Southern Illinois. And they did it with mud.

Jesse Graves, a Milwaukee artist, developed the technique and on Saturday more than 30 volunteers stenciled the message “End Torture in Illinois” on walls and sidewalks around the city, offering fact-sheets about TAMMS supermax prison to curious pedestrians.

City governments and law enforcement agencies have little precedence in dealing with mud stencils so there is a gray area on whether it is legal or not. For if it is illegal, is it also illegal for kids to write with chalk on the sidewalk? Is it illegal to build a snowman in a park or for dirt from ones garden to touch the sidewalk? And, is it illegal to stencil with mud when the rain will wash it off?

That said, none of the 30 volunteers who mud stenciled on June 6th in Chicago were arrested or even questioned by the police.”