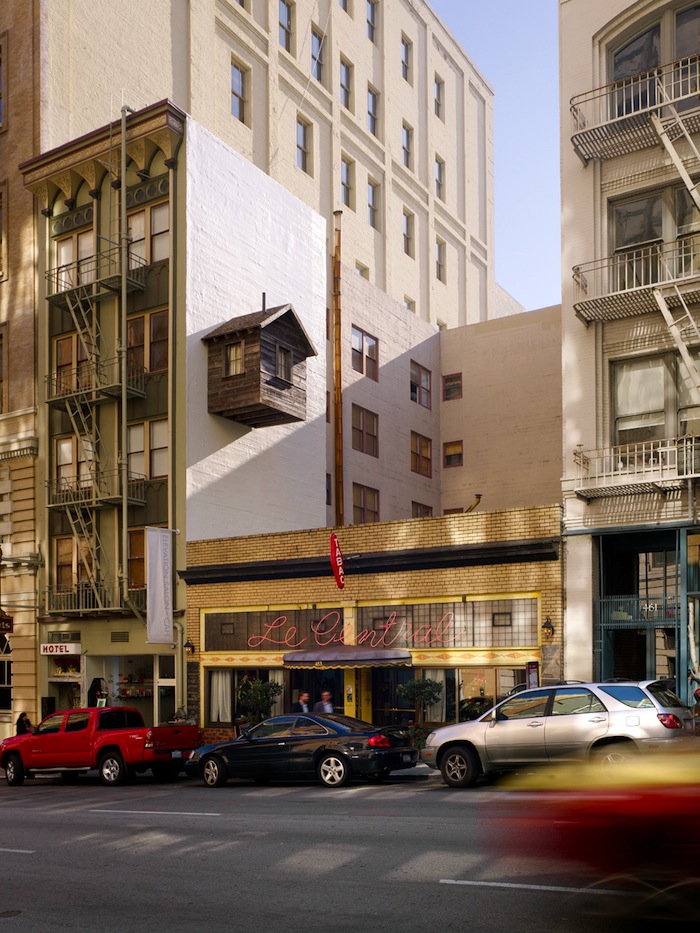 Manifest Destiny! is about our God-given imperative as modern explorers, to seek out parcels of unclaimed territory and boldly establish a new home front in the remaining urban voids of San Francisco.


Overview:
Manifest Destiny! is a temporary rustic cabin occupying one of the last remaining unclaimed spaces of downtown San Francisco—above and between other properties. The cabin is affixed to the side of the Hotel des Arts, floating above the restaurant Le Central like an anomalous outgrowth of the contemporary streetscape. Using a 19th-century architectural style and vintage building materials, the structure is both homage to the romantic spirit of the Western Myth and a commentary on the arrogance of Westward expansion. The interior space of the tiny house can be seen day and night through the curtained windows, a lonely beacon in the city’s dense landscape, and an incongruous, haunting vision from below. The installation will remain in place and be slowly transformed by the elements through October 2012.

The cabin is a temporary site specific installation in San Francisco, California. The project was commissioned by Southern Exposure and funded by the Graue Family Foundation.
The project will be on view through October 28th 2012

Details:
The cabin is approximately 7' wide x 8' deep x 11' tall and sits approximately 40' in the air. The cabin frame is made of welded aluminum while the exterior is finished with 100 year-old reclaimed barn board from Ohio. The rear roof has a 3'x4' solar panel which charges during the day and lights the cabin interior at night. The cabin weights over 1,000 lbs.