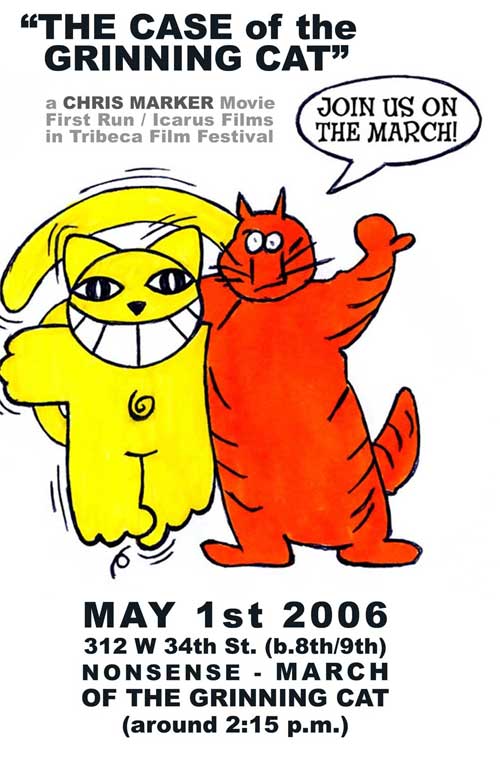 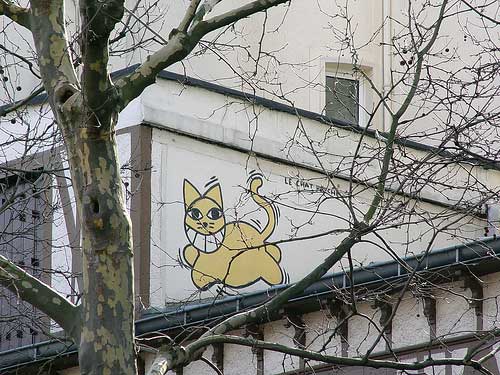 The march, which will begin after the screening around 2:15 p.m. outside the AMC Loew’s 34th Street theater (312 West 34th Street, between 8th and 9th Avenues).

Here’s a description of the film:

The Case of the Grinning Cat, the latest creation from legendary French filmmaker Chris Marker, takes us meandering through Paris over the course of three years—2001 to 2004—ostensibly in search of a series of mysterious grinning cats whose stenciled image has sprung up in the most unlikely places: high atop buildings all over the city. The film—of which he has just prepared the English version—begins in November 2001 in a Paris still fresh from the shock of the September 11 attacks on the U.S., and where newspaper headlines read “We are all Americans.” Over the next year, in the lead-up to the Iraq war, the city’s youth march in numerous demonstrations for all manner of causes as Marker continues his pursuit of the mysterious cats. He finds them again, to his surprise, showing up as the emblem of the new French youth movement. “Make cats not war!” street art is the flip side of the idealism and exuberance driving the young people marching in protests the likes of which Paris hasn’t seen since the mythic events of May 1968. While at times it might seem that the spirit of idealism has survived intact, the filmmaker’s observation of it is tempered. Causes too, he observes, are a matter of fashion, and the film ends on a somber note. Cats and owls, politics and art, nimbly take their places in this Marker shuffle. The whole is woven together by the filmmaker’s at times surreal humor, and by his astute and effortless camera that never fails to linger on the odd, ordinary, ineffable moments that only his eye can turn to gold dust.—Dorna Khazeni