In June, we went to Melbourne to carry out a large-scale installation, our largest so far, at the Light in Winter festival.

This year’s theme was “reading”, for this reason they asked us to recreate Literature vs Traffic, a piece that we had previously installed in New York in a subversive manner and which they now offered us the opportunity to expand it and make it grow for a month.

To the other side of the world we went, going from the sunny summer in Madrid to a mild and rainy winter, with the romantic intention of converting the modern and somewhat cold architecture of Federation Square, into a cozy, human and intimate space, which encouraged reading and tranquility.

We had 10,000 books discarded by public libraries because they considered them to be obsolete, that the Salvation Army was responsible for collecting and donating them to us, altruistically of course, we also had our lights and the help of a lot of friends with whom we lived for a month doing the work of assembly and installation.

The objective of this piece? The same as the first time that we carried it out, that a river of books overflowing into the physical pedestrian spaces and installed itself in the space allocated to cars, stealing precious space to the dense traffic in the area, in a symbolic gesture in which literature took control of the streets and became the conquerer of the public space, offering the citizens, a space (not as big as we would have liked) in which the traffic withdrew yielding ground to the modest power of the written word.

We managed, after a tough battle against the weather, to change the appearance of the plaza progressively for a month, and that on the night of June 30, a lane of the busy Flinders Street became a space for reading and coexistence, lit by a dim light that paled under the powerful LED displays installed in the plaza.

Our piece served as a backdrop for many things that happened there during these days. Of course, it was the scene for a multitude of photos taken by the curious and visitors, in addition it was accompanied by  many other pieces installed during the festival of light, and to commemorate the el summer solstice it was used as the stage for the dance and performance piece Walking Through Words, directed by Tony Yap and Yumi Umiumare in collaboration with various communities from the city.

On the final night, the overflowing river of books, was offered to the visitors who took their time choosing the most interesting to take home from the thousands installed there. In addition 9 artists from the company Yumi, conducted an impromptu and magical performance that ended in a donation of books to the occupants of the cars that were circulating in the vicinity, who, stupefied opened their windows to receive these mysterious presents. 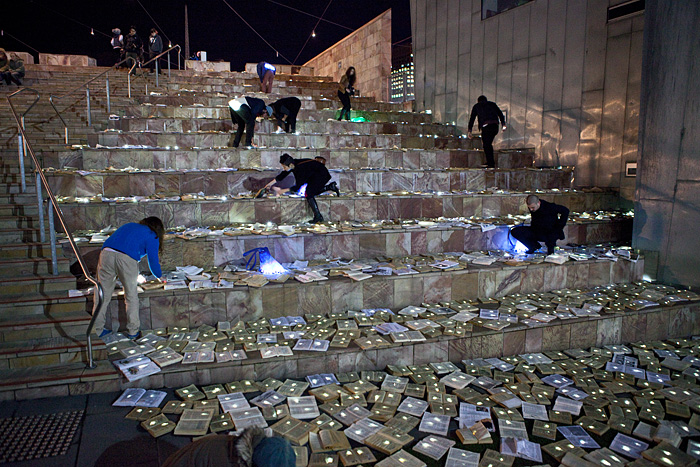 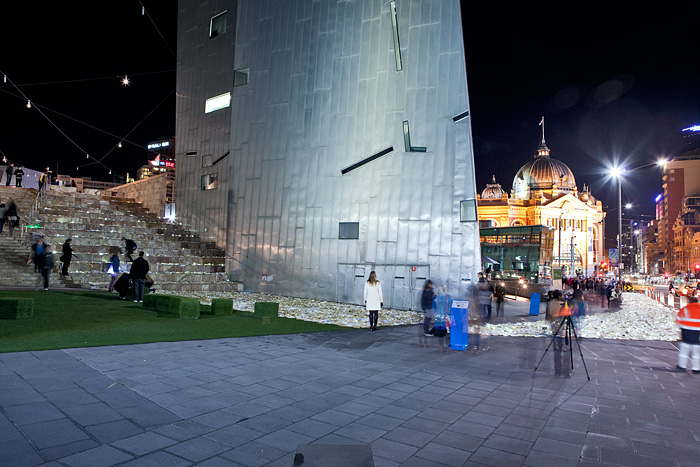 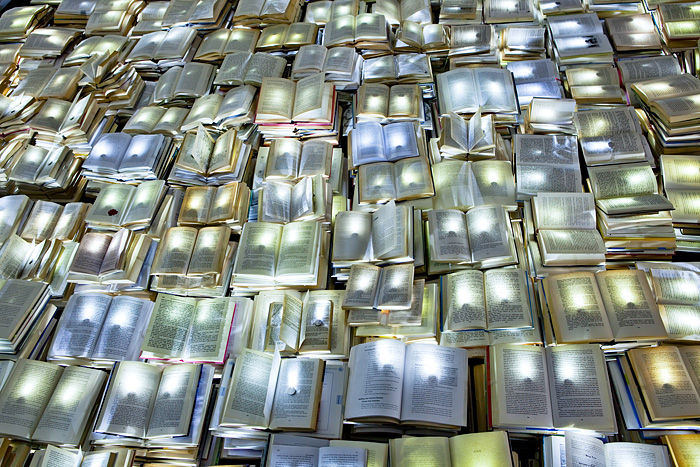