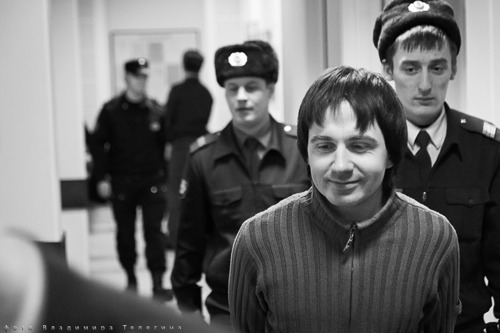 From our friends at Pictures On Walls comes news that Oleg Vorotnikov and Leonid Nikolaev from Russian art group VOINA have finally been released on bail.

“In December, Oleg and Loenid were arrested for making some pretty racy public art pieces. After spending three and a half months in a St. Petersberg jail infested with scurvey and TB we’re delighted to report that the pair have just been released.

Officials at their court hearing were apparently unaware more than 400 punters had bought a Banksy print and the proceeds had been transferred over. A judge set bail at 600,000 roubles (a pretty unattainable amount for the average Russian) but they were able to produce all the cash on the spot and the pair walked free.”