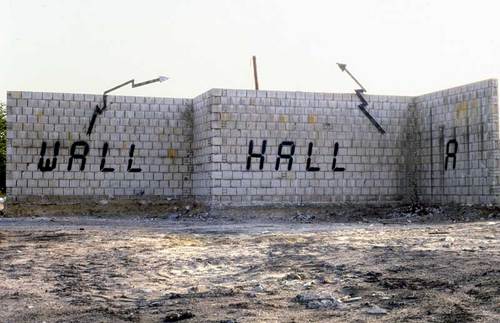 In commemoration of the Berlin Wall coming down on Nov 9 1989 we thought we’d share this story about John Fekner.

In 1986, Fekner spent time in Berlin as part of an invitation group exhibition featuring collaborations by New York and German artists. He visited East Germany entering through Checkpoint Charlie; the visit left a strong impression on Fekner, and subsequently, the work he created while in Berlin.

He created three separate wall installations: a spray-painted fragmented wall that appears to be breaking apart indoors at NGBK; The Beton Puzzle (Concrete Puzzle) painted directly on the Berlin Wall; and, among multiple sites within the city, Fekner collaborated with Peter Mönnig on Wall-Hall-A, an outdoor installation at Potsdamer Platz near the Berlin Wall. The Wall-Hall-A project can be seen in Wings of Desire (Der Himmel über Berlin), a 1987 film by Wim Wenders.