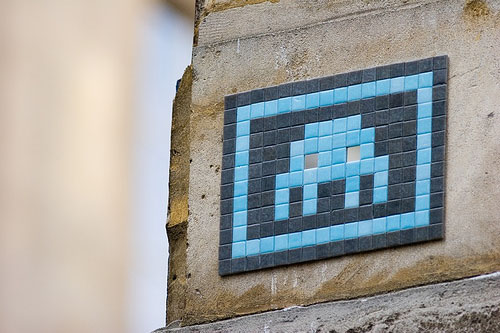 Along with hundreds of thousands of people from all over the world, we’ve been obsessed by Space Invader’s work for years.  This week, Invader updated his website, and for the first time, posted a Q&A which gives some background and explains what his project is all about.  We thought we’d pass it along.  In addition to checking out Invaders site here, you should also check out Invader Flickr pool which includes over 3,600 photos.

I’m Space Invader (that’s my alias). I always appear masked in public, so no one knows my face.  Some people call me a polluter, others say I’m an artist. I prefer to think of myself as an invader !

What’s the Space Invaders project about?

The idea is to “invade” cities all over the world with characters inspired by first-generation arcade games, and especially the now classic Space Invaders.  I make them out of tiles, meaning I can cement them to walls and keep the ultra-pixelated appearance.

How many people are involved?

Just me. In the eight years I’ve been working on this project, I’ve traveled to 35 cities on all five continents with the sole intention of “invading” them! Having said that, people have sent me photos of Space Invaders in towns I’ve never set foot in! I see it as a positive thing, a kind of tribute. I did consider setting up a group strategy but it’s a hard thing to delegate. So while I don’t encourage this kind of copying, I don’t especially condemn it either.

What made you choose Space Invaders as the main character for the project?

Lots of reasons. I see them as a symbol of our era and the birth of modern technology, with video games, computers, the Internet, mobile phones, hackers and viruses.
And “space invader” is a pretty good definition of what I’m doing… invading spaces!

How do you stick them down?  Do they ever get damaged or stolen?

I use extra-strong cements. Nothing lasts for ever, but if a thing’s worth gluing, it’s worth gluing well! It has been known for a disgruntled building owner or the council to tear down an Invader. As for “Invader thieves”, nine times out of ten they end up with a few broken tiles; they’re too fragile to be prized off in one piece.

How do you choose your spots?

I go everywhere in the city, and I watch carrefuly. A spot is like a revelation… it jumps out at you.

Taito Corporation owns the rights for the original game.  Have they taken action against you?

No.  They might if I invented a game and called it “Space Invaders”, or made t-shirts with the original desing on them, but that’s not my intention. Also, my Space Invaders have evolved away from Taito’s, as I’ve combined the original four characters to create thousands of variations.

How do you go about an invasion? Do you make the Invaders in advance?

It depends. I’ve developed all kinds of techniques so I can adapt to different contexts, like how busy the spot is, when the invasion takes place, the size and weight of the Invader, how high up the wall it’s going to be, etc. It takes at least two weeks to invade a city.  I don’t just put up a couple of Invaders in the center then go home. I set out to cover the entire city.

Have you ever run into trouble with the police?

Sometimes, but that’s part of the game. Then it’s a case of “go to jail and miss three turns”!

Do you keep a record of all your Space Invaders?

Yes.  Because they’re all different, they’re all numbered, photographed and carefully indexed.  Some of this information is given in the “invasion guides”, each of which retraces the history of a particular invasion. The first two volumes are for Paris and Los Angeles. I’m working on the next ones.

What are the “invasion maps”?

Street maps are an important part of my invasions. For every city I invade, I make a note of where each Invader is on a map.  After certain invasions, I’ve drawn up an “invasion map” which is a kind of record of how the invasion happened. This map is then printed and distributed in the city in question, and sold in the Space Shop. So far I’ve produced 15 “invasion maps” (out of 35 invaded cities).

Are all the Space Invaders photos online?

No.  Only a fraction of them are on the site.  You can see a lot more on photo-sharing sites like Flickr.com.

Is there a political message?

The act in itself is political, as 99% of the time I don’t have authorization. Otherwise, it’s more an experiment than a protest. Obviously there’s the gaming aspect too, as I’ve spent the past eight years traveling from city to city with the sole objective of getting a maximum score.

How does your scoring system work?

It’s very straightforward.  Each Space Invader is worth between 10 and 50 points depending on its size, composition and where it is.  So each invaded city has a score that’s added to previous scores.

Are you still invading?

Absolutely.  Not a week goes by without new Invaders appearing.

Do you show your work in institutions or galleries?

Yes. What you can see in the street is only part of what I do.  I like to switch from one to the other, it’s a way of doing different things. Right now I’m working on a project that uses Rubik’s Cube, the Eighties cult puzzle, as the basis for pictures and sculptures. I call this my “RubikCubist” period.

I feel it’s a logical, and interesting, continuation of my work.  Like Space Invaders, the Rubik’s Cube is an 80s game made from colored squares.  It’s a fascinating object, as it’s both extremely simple and extremely complex. Did you know there are over 43 billion possible permutations for a Rubik’s Cube? I use the Rubik’s Cube like an artist uses paint. I like the idea that it wasn’t intended to be used this way, and that ultimately it works really well.

How can we find out about your exhibitions?

By signing up for the newsletter.