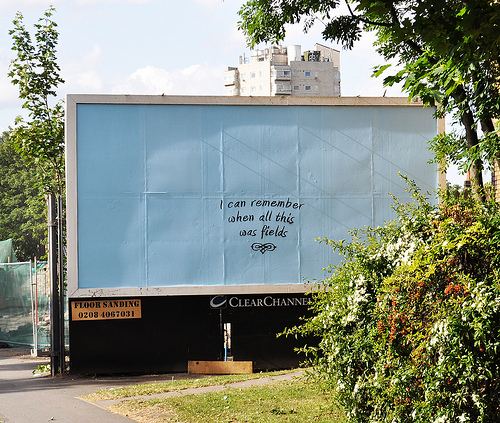 ‘I can remember when all this was fields’ sounds pretty much like something you would expect your grandad to say as you drive past the newest and most monstrous of shopping centres doesn’t it? With the seemingly endless stream of development around London town and the proliferation of advertising messages on just about every conceivable surface which are forced into our brain (without our permission) on a daily basis it’s sometimes nice to strike back with a simple message to bring a bit of levity to an otherwise tedious day.

To think there was a time (not that long ago) when there was a little more greenery about and that every single scrap of land wasn’t pounced on for yet another massive advertising hoarding (or completely uninspired housing development.) But then again, perhaps i’m just being a little sentimental.

Anyway, after doing a little reading into billboards I came across this interesting thread on a Brixton forum about illegal billboards. It seems that billboards are sometimes set up without planning permission whilst the companies doing it know they can make more than enough in advertising revenue to remove the boards or pay the fine when the council finally get round to identifying the culprit and doing something about it. Now, whilst the billboard we went on is probably entirely legal it was covered in blue paper which is definitely fair game in my eyes. And i’m sure i’ve suffered enough at their hands over time to make this the mildest form of payback.”