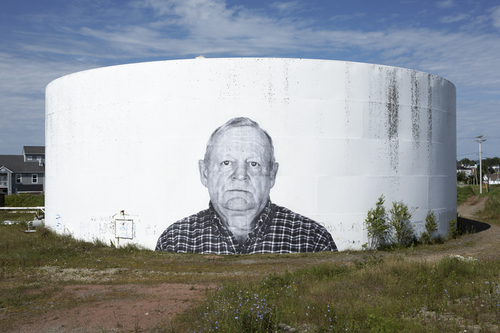 The large-scale portraits in Gaspesia: Les portraits en papier represent former employees of Papiers Gaspesia, a pulp and paper mill founded in 1912 by Percy Milton Chandler in Chandler, Quebec. Named for the mill’s founder, the port city’s economy and social organization depended heavily upon this industry. In 1999, Papiers Gaspesia’s closure was announced and, despite a government-sponsored infusion of roughly $400 million, it is now set for demolition. The closure of the mill has had a profound effect upon the people of Chandler. Widespread unemployment, the permanent and temporary migration of workers outside of the city, the separation of families and subsequent increased rate of divorce, and the ground and water pollution left from the plant are just some of the economic, social and environmental problems created by the closure.

Gaspesia: Les portraits en papier literally puts a human face on the industrial remains of Papiers Gaspesia. Portraits of the former mill and forest workers are installed on the front of the mill and on the mill’s oil tanks. While these men and the story of the mill are well known in the community, the deteriorating mill itself has been the only public memorial to the pride, grief and frustration those affected by the closure feel. The images of these workers now mark the physical structures of the mill and lay claim to its history and to its continuing impact on Chandler. One of the subjects, Serge Soucy, remarked that you could see his “eyes were crying for the mill” when he saw his own 30 foot face on the Papiers Gaspesia’s oil tank.

Gaspesia: Les portraits en papier was commissioned by Rencontres Internationales de la Photographie en Gaspésie as part of their annual photography festival in conjunction with the city of Chandler, Quebec.