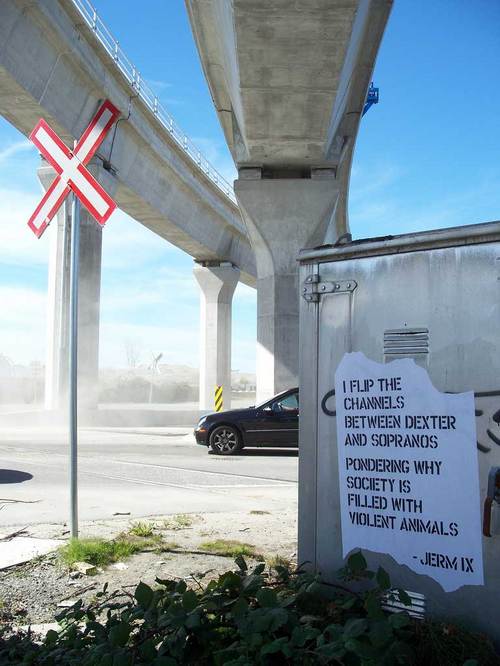 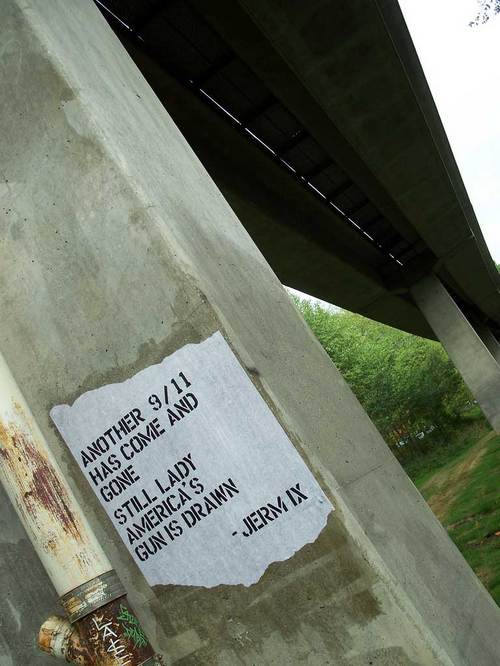 There’s something about Jerm IX’s street poems that are very powerful. We asked the artist to tell us about the two works above.  Here’s the response:

“i have been affected by violence as both a victim and a perpetrator and therefore it has been a topic i speak on regularly in my street art. for example, when polish immigrant robert dziekanski was tasered to death by police at vancouver airport a few years back, i put a handful of stickers around the city that read ‘i hope you don’t get tasered’, when the ‘lower mainland’ was inundated with gang murders i put up a ‘lower gangland’ sticker, and so on. now that my work has evolved to poetry scrolls i have merged my songwriting and street art, which has allowed me to work in my favorite format, my obsession, rhyme patterns.
the dexter piece speaks for itself, we are fascinated by the things that appall us.
we vilify the monsters and killers and criminals before we give oscars to the actors that portray their stereotypes.
the ‘...america’s gun is drawn’ piece is a peaceful protest, an anti-war slogan.
the eight year anniversary of 9/11 has just past and still america is at war.
my country, canada, where the piece was put up, is at war in afghanistan, outside our traditional and respectable peace-keeping role. it’s shameful, you’d think being attacked on north american soil would teach us something about violence.
violence is not the answer.