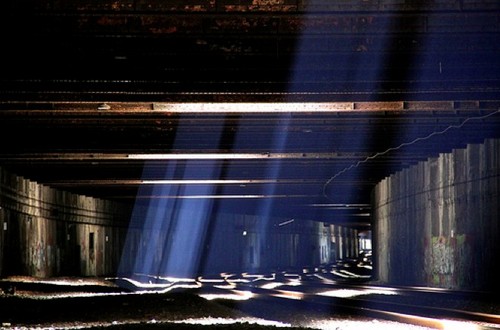 “Under Manhattan’s Upper West side, runs the “Freedom” Tunnel. Built in the 30’s by Robert Moses, the passage boasts legendary graffiti murals and piles of debris remaining of the past homeless city era. After using it for only a couple of years, Amtrak discontinued the line and left a massive cavern which later became a shelter for street people. Progressively, the tunnel turned into a veritable underground metropolis where thousands of homeless were living in organized communities underneath the city’s skin.

The tunnel also became a prime spot for graffiti artists. Chris Pape, aka Freedom, was one of the pioneers and his work inspired the name of the tunnel. “Freedom” painted immense murals utilizing the unique lighting provided by the ventilation ducts, turning the tunnel into an extraordinary underground art gallery. Some of his most notable paintings survived for decades and are still conspicuous today (“Venus de Milo”, the “Coca-Cola Mural”, Dali’s “Melting Clock”,a self-portrait featuring a male torso with a spray-can head, etc.).

In 1991, Amtrak decided to reopen the tunnel. The shanty towns were cleared out by the police and homeless were evicted. Although deserted, the tunnel is now an active train line and a stunning experience for urban explorers.

It is a bizarre blend of dark and light, silence and rumble, solitude and multitude. As you penetrate the tunnel and walk along the tracks, the sunbeams perforating the ceiling and highlighting the railway gives the place a post-nuclear feel. Voices from children playing above in Riverside Park sound like lost souls and trains whistling and roaring through the ruins of the shanty towns send chills down your spine.

This is one of the most uncommon and fascinating journeys I’ve ever taken.”