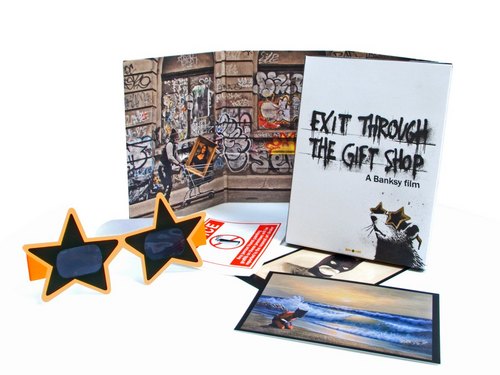 For those of you who are package design fans, last night Banksy released the packaging and extras for the United States version of the DVD release of his acclaimed film, Exit Through The Gift Shop. DVDs will be in stores across the United States starting on December 14th with the film going first to iTunes and Movies-On-Demand channels beginning November 23rd. (You can pre-order the film on iTunes starting today)

In addition, to celebrate the digital and DVD releases there will be a free screening of the film in Minneapolis at the Landmark Edina Cinema this Thursday night 11/18 at 7:00pm. There is no guest list, and attendance is on a first come first serve basis.

And for those who are asking, because of the incredible demand for it, the DVD extras do indeed include Thierry Guetta’s LIFE REMOTE CONTROL (LAWYER’S EDIT).