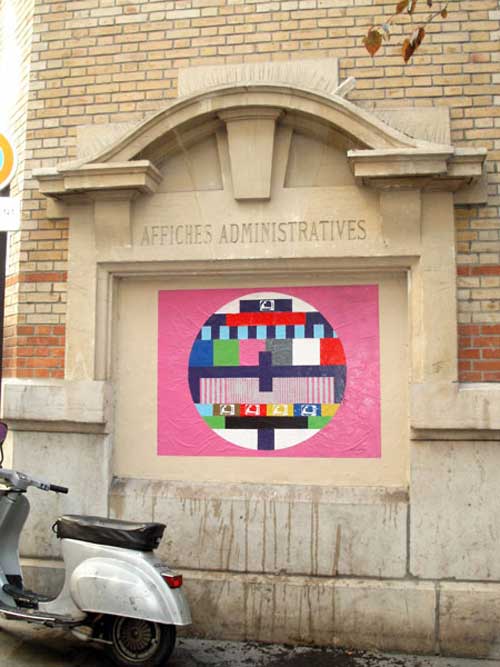 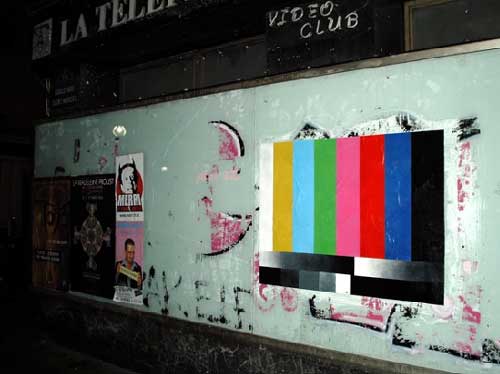 “The mire.project, started in November 2005, is a long term approach of street art expression in the streets of Paris and elsewhere on the subject of television test pattern. Initially used to evaluate the quality of cathode ray tube displays, it is not for that reason that the test pattern owes its world-wide popularity. Until the beginning of 80’s, the test pattern was broadcast at the end of the programs of most television channels, to fill the cathodic vacuum during the night. At this time, the television was stopping, like us, in order to sleep. Nowadays the test pattern is becoming more rare, channels are broadcasting programs day and night without interruption, never. If you are about 30 years old today in 2006, you should already have seen a television test pattern. this multicoloured image, going with monotonous and hypnotic sound, is without a doubt engraved on your mind. In return, if you are less than 30 years old, this emblematic image had probably not the same impact on you. Nowadays, the «end of tv programs» is past, the test pattern is henceforth extremely rare.

The test pattern is a very strong universal symbol, evoking the world of television and media. It summarizes itself, with a few strips of colors and grey gradations, the whole cathodic era, its consequences on the world and the ascendancy that the television can have over us, our life, our everyday life.

The test pattern is also, in a way, a logo, as famous as Mickey’s ears or the yellow «M» of Mc Donalds. But what is the test pattern advertising for? Nothing. It does not have any commercial goal, contrary to most logos. A mass communication, but nothing to sell: a perfect anti-advertising. Isn’t it a surprising paradox? Are there other emblematic images so famous but without having nothing to sell? Nobody never tried to do the promotion of the test pattern, but nevertheless everybody knows it. Isn’t it amazing?

The test pattern is also not so far from the famous slogan «Big Brother is watching you», extracted from the novel 1984 by George Orwell. It has got in all homes, without being invited. It has often been at the center of the main room, conveyed by a television erected as a totem.

The purpose of the mire.project is not to denounce or to criticize the world of television. The mire.project is neither militant of something, nor anti anything. Its purpose is mainly to send that subliminal image back to the eyes of people, in order to arouse, I hope, some reaction and reflection on what television has become, the powerful impact it has on populations and, more generally, on the phenomenon of screen addiction whatever they are (television, computer, phone, etc). Its purpose is also artistic and aesthetic. I hope!”