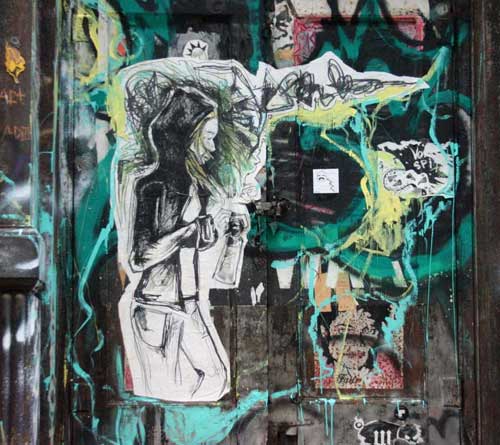 One of the things that fascinates us most about street art is that behind every piece of art there is most often an amazing story.

Sometimes those stories are deeper and more personal than you might think.  Most often only the artist knows the story and because of this, the piece takes on an even greater significance.

The piece above was placed anonymously earlier this year on one of our favorite spots for street art on Greene Street, not too far from where we live.

While most people walked by not even noticing, here’s the story behind the piece:

The drawing was done by Melanie in memory of her friend Ivy Marcella. Ivy Marcella passed away last year at the age of only 19.

Melanie was born and raised in Manhattan but Ivy Marcella was originally from Martha’s Vineyard. She came to visit Melanie in the city and the two spent most of their time walking around Soho.  They spent a lot of time on Greene Street and Melanie made Ivy Marcella take “cool deep artistic pictures” at the exact spot in the photo above.

What Melanie didn’t know at the time was that a year later the spot on Greene Street where artists have put up their work for years, would mean a lot more to her.

After she died, Melanie went back to the place on Greene Street and put a portrait of Ivy Marcella in her honor and in her memory.