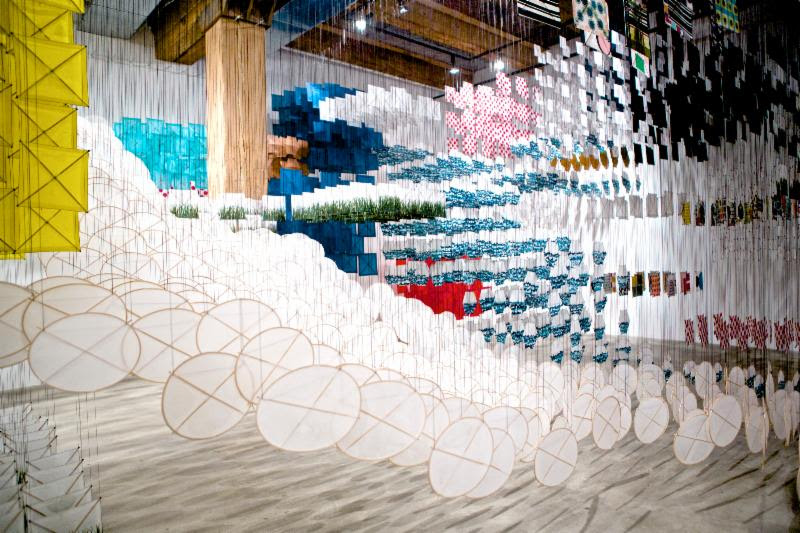 If you're in Los Angeles, check out Jacob Hashimoto's show at the Martha Otero Gallery

" Hashimoto gleans his visual and metaphoric resources from three-dimensional rendering technologies alongside traditional techniques of applied crafts. Rising from the ground floor of the museum into its upper levels and stairways, Hashimoto's environment oscillates between states; it feels grounded and yet floats skyward. There are reminders of nascent forms of digital construction in Hashimoto's oeuvre-in particular, the virtual sandboxes and open worlds in video games like Minecraft, Rogue, and Spore. A sense of wonder pervades these worlds-whether because they offer infinite maps, nonstop levels, or even endlessly plentiful mines and farms. Hashimoto translates these infinite systems into the realm of actual reality, excavating the poignant tensions that result when a visual aesthetic inspired by the boundlessness of virtual space meets the constraints of real-world labor and craft.


Jacob Hashimoto was born in Greeley, Colorado in 1973. He received his BFA at the School of the Art Institute of Chicago in 1996. Solo exhibitions of Hashimoto's work have been held at the Schauwerk Sindelfingen (The Peter Schaulfer Foundation in Sindelfingen, Germany), the Bildmuseet Umeå (Sweden), MACRO (Museo d'Arte Contemporanea di Roma, Rome), the Museum of Contemporary Art Chicago, Mary Boone Gallery (New York), Rhona Hoffman Gallery (Chicago) and Studio la Città (Italy)."