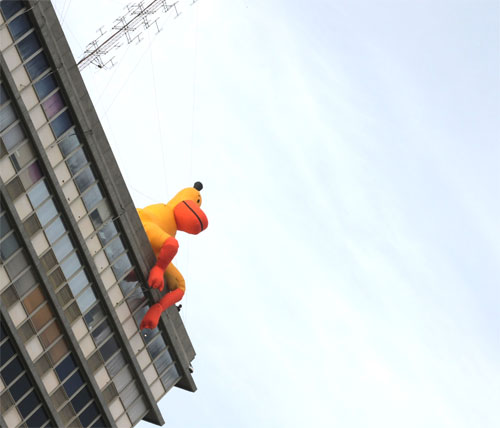 To celebrate the life of Dudu Geva, Israel’s most famous cartoonist (who died of a heart attack back in 2005) a giant yellow duck has been placed on top of Tel Aviv’s City Hall in Rabin Square.  The piece will be in place for one month in honor Tel Aviv’s 100th anniversary.

Before his untimely death, Geva had been tongue in cheek - or rather tongue in bill - trying to convince Tel Aviv’s mayor to liven up the city through weird, wacky and subversive art projects. One dream was to turn Tel Aviv into a city of ducks - an animal character he used often in his cartoons.

When Geva died, his dreams to liven up Tel Aviv with bizarre art installations and stunts lived on. The Duck was just one of the ideas.

Geva had been quoted saying that Tel Aviv was in dire need of decoration. “City Hall,” he said, “is a lost cause. If a giant duck is placed on its roof, everything will be turned upside down. The idea is to bring joy to people’s hearts and to make art a part of daily life.”

Other ideas that Geva thought about included opera singers who would spring out of garbage trucks singing arias, or the placement of giant snakes on the roofs of Tel Aviv’s swank Rothschild Boulevard.

Most of his ideas weren’t taken seriously though by the city. Recently, his family returned with the duck idea and within a week it was accepted.

Come mid-April, Geva’s friends, colleagues and children will kick off the launch of the giant duck at Tel Aviv’s City Hall.

“On the 15th of April, there will be a small ceremony around 6pm in the evening in Rabin Square, and we will watch the duck on the building get inflated,” Caspi tells
ISRAEL21c. “It will be a small artistic event and a ceremony,” he says, intended to honor Geva, his duck and Israeli comics.

After all he contends, “Dudu Geva’s duck is not a duck. It’s The Duck - maybe the most famous Israeli symbol. Well, at least for Tel Avivians.

“This project is a memorial to him,” says Caspi.

Why ducks and why art? “Artists make life a bit happier,” says Caspi. “The whole idea is not a political one. It is not an artistic statement. It is all about being happy and making the city a nicer place to live - a place that kids like to be in.”

Geva’s daughter Tami recalls her father’s plan to turn Tel Aviv into a Duck City: “He never at any stage thought that they would take him seriously, but he wanted to spread the ‘duck movement’ as an artistic and social movement,” she said in a local newspaper.

“We don’t want the event to feel like a memorial,” she said, “We want my father’s idea of putting art in open public spaces to continue to exist, with humor, in the spirit of the duck.”