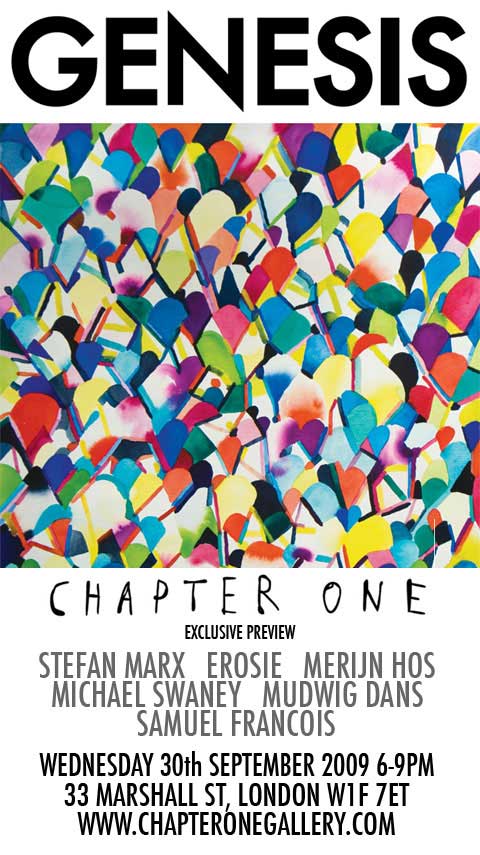 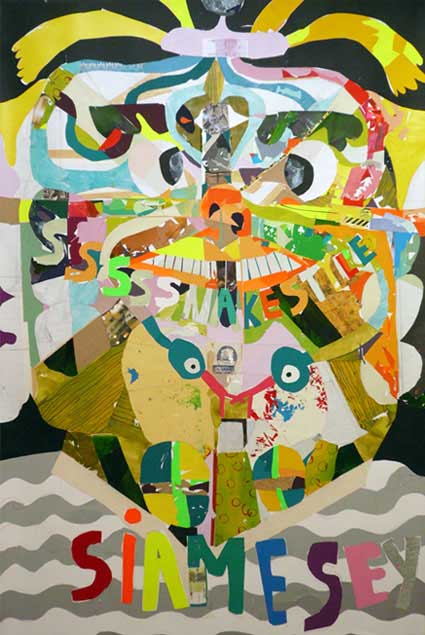 Congratulations to our friends Al and Tim who tomorrow night, Wednesday, are launching their inaugural exhibition at Chapter One, their new gallery in London’s Newburgh Quarter (Soho)

Sara and I have known Al (aka Mysterious Al) and Tim (aka PMH) for a longtime. It was Al and Tim (along with Pure Evil, Dface, mjar, Adam Neate, Chimp, and Ichi Bunny) who first introduced us to Brick Lane and the London scene back when we launched the Wooster Collective site many years ago. For us, their Finders Keepers shows were the personification of the European street art scene and nothing has captured that energy since.

Tim tells us about the new gallery:

“We’ve been lucky enough over the past few years to travel the world and meet some amazing artists, who we have shaken our heads wondering why these artists have not been shown in London.

We believe that we are in a time of change, of flux..where there are many contemporary artists maturing into artists with the depth and quality of vision and skills to be genuinely importance… artists who have are already shown in museums around the globe, but in the London market are still unknown – either by naivety or lack of commercial hype.

Although the street art boom in London of the last few years has been exciting at certain times, we feel that London has not shown or featured many exciting contemporary artists that seem to be successes everywhere in the world – everywhere apart from our city!

We will be exhibiting artists that many people in London will be unfamiliar with, but in that respect we want to be like the great record labels, such as Blue Note and MoWax, where if you like what we do, you might not recognize the name of our next artist, but you trust us in delivering the best from around the world, and chances are you will be a big fan after seeing their work.

Growing up in around the late ‘90’s was inspiring, as it was a really exciting time for London…local music labels like MoWax and artists like Tracy Emin and Damian Hirst (back then!) showed us exciting

We were really excited and influenced by all the new and interesting art and music that was coming out of local record labels like Mo’ Wax, the whole YBA Damien Hirts and Tracy Emin scene… Skate art was really exciting and there was so much interesting stuff coming over from the states, that felt so exotic and far away at the time.

The early years of this century have been cool with the emergence of street-art. We were involved in all of that and we hadn’t a clue what sort of a monster we were inadvertently creating. It was exciting for a while, but then the over-inflated price tags attached to ‘street-art’ and a million stencil-artists riding in Banksy’s wake seemed to bring a real shift in the priorities of galleries and artists.

We could give you a list of names of who we will be showing, but that would ruin the surprise for you all…so keep your eyes peeled and you will see who we have planned.!

We feel that galleries in London have become a bit pedestrian…it seems like galleries aren’t somewhere that promotes, pushes and celebrates art, but simply shops pushing product without passion..like footlocker or Topshop. Call is idealists but galleries should be inspiring and exciting.

We want to bring the passion back.

We have events, launches and parties all in the pipeline. There wont be snooty assistants who are clueless about the art or the artists - there will always be someone there to talk you through it if you’d like…and we want everyone to feel welcome rather than unwanted.We have a nice outdoor area where people can meet and relax…although with todays rain we need some parasols! We are in the heart of London, and we want to be a meeting place, of not just ideas but of people. Around the world there are spaces which support scenes and individuals, but in London we seem to be lacking one. London is seen around the world as ‘cool’ or a hub of art…but in our honest opinion we feel it can be better, and like the punk ethic – if it aint being done, do it yourself!

After a decade of hustling and rejection..the 4 directors have a large network of Londoners who want to make London matter again…somewhere where the focus is on good art and pushing artists rather than solely on the cash till…true we are a business and would like to hear ‘profit’ rather than ‘overdraft’. We will be releasing many products, but again, products that we as fans would go crazy for, rather than a soleless by-product knocked out to cover overheads.”

So if you’re in London this week, be sure to head over to Chapter One and give Al and Tim a high-five from us.