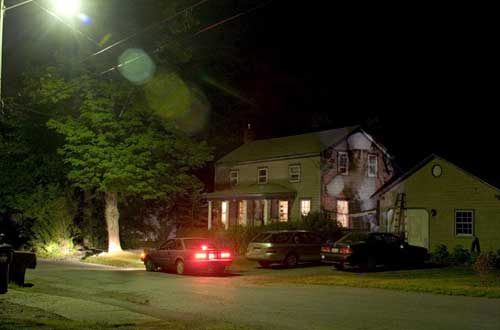 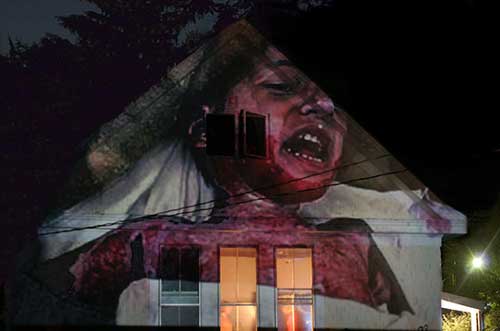 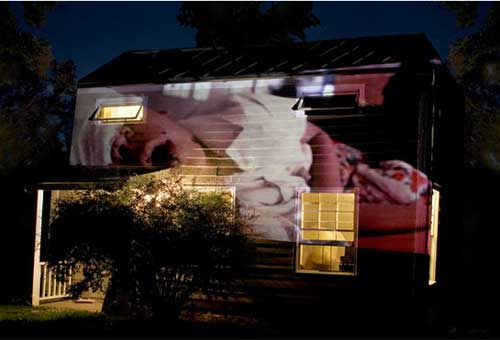 This is one of those instances.

From Jimmy comes a link to the website of Jean-Christian Bourcart. The projections above, called Collateral, were done Tivoli in New York State in 2005.

“I projected photographs of mutilated and dead Iraqis on American houses, supermarkets, churches, and parking lots. I was thinking of this new generation of kids who will be traumatized for life by growing up during wartime. It was a desperate gesture: my personal protest for the lack of interest for the non-american victims. I found the images on the web. Some American soldiers post their own pictures on a website. They would show a cut leg with the caption: “where’s da rest of my shit?” Or a blown up head with the caption: “need a hair cut” .
I could not help thinking of those images as some kind of restless ghosts that endlessly wander in the intermediate level of the web. I took care of them like a embalmer would; downloading, revamping, printing, rephotographiing, then projecting them as if I was looking for a place where they would rest in peace and at the same time haunt those who pretend not to know what was going on. “

If you can stomach it, we highly recommend that you check out the full gallery of photographs on Jean-Christian Bourcart’s website.