“For the past week I have been involved in an amazing project that reminded me why I do this and helped me to reconnect with both other artists and the street in a very real and loving way. Organized by Taylor Cass Stevenson, the project is called Live Debris and consisted of public installations and interventions along Portland’s East Side Esplanade. Not content to simply be an art show on the river Live Debris sought to involve the homeless residents of the Esplanade through a huge welcoming breakfast on the opening day. What could have been a cold rainy washout for the opening turned out to be, at least for me, the most rewarding part of the entire week. Local residents who would have very likely gone hungry for the day were awakened to a massive spread of all the donuts, fruit, pastries, bagels, and more that they wanted. A hell of a lot of smiles were shining that morning including me grinning from ear to ear.

From the Live Debris site:

Live Debris 2009 is a traveling series of events and installations dedicated to sharing and establishing new reuse traditions as a way of reducing stigmas around garbage, poverty and street culture. Starting and ending in Portland, Oregon, Live Debris 2009 traveled to Rio de Janeiro as a bi-lingual, collaborative series of events networking local and international artists and innovators to reflect upon humanity’s rapidly changing relationships with garbage. Works of reuse art and design traveled from Portland to Rio de Janeiro, where Brazilian artists physically and philosophically added to the same works to express their more polemic and necessity-based attitudes towards humanity’s discards. After 5 months of workshops, clothing exchange parties, public installations and exhibitions, the artwork returned to Portland, Oregon for a series of final events.

Here is the piece I made from ceiling fan blades that I found on the riverbank during my first visit to the site: 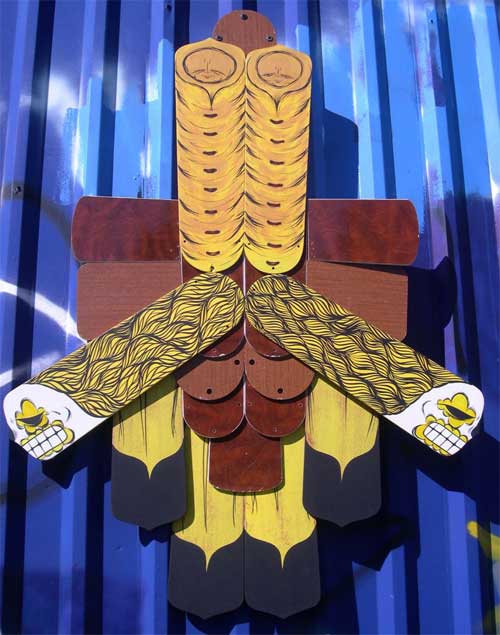 And a collaboration I did with Ment from Rio de Janeiro on an old window shade:

You can see more photos from the project here.