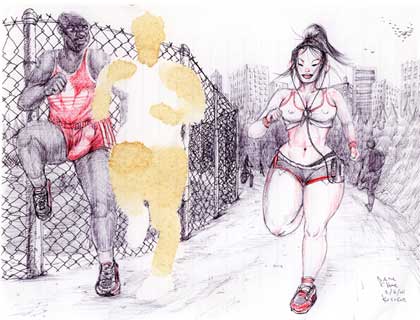 “I won’t come down.
The past year has been pretty break neck.
Soon after my release from prison work just took off, and I been running to keep up with myself.
I apologize for all the unanswered e-mails and unreturned calls,
all I want to do when I finally do get home is sleep.
I haven’t shown anywhere this year, because I have nothing new to show.
A lot of artisits paint FOR a show, (I’m guilty of this too) but
you should only
Show when you have work ready to show.

Group shows are fucking horrible and a joke.and have been played
out for more than a minute. Can everyone just stop it?
Nobody buys anything and did you really want to become an artist so that
You can paint on a pair of speakers, or jeans, or shoes or trucker
caps, or whatever the gimmicky
fuck.
Cut it out.

There’s a lot of projects I do want to pursue, but with the NEA
pretty much non-existent, and constant
rejection
From established art institutions, grants, fellowships, and
museums. Corporations and small
businesses are the new
National endowment of the arts, they are the new champions of the
arts. If this is their motive or not,
or even if it’s for more exploitve selfish reasons, I could care
less. Your support of me over the past
year has afforded me the freedom to travel and paint, and express myself.
Thank you Upper Playground, Warner Brothers, Mercury Software,
thefacebook.com, SCION, and
Electronic Arts
To those who view this as a sell out move, I say keep fighting your
fight and waving your flags.
Each and everytime I get paid to destroy public property I count
that as a win.

Powerhouse is the name of an Oakland based hardcore band, a gay sex
club, and also the name of
the gallery
That I will have my first real show in new york city. I ‘ve been
painting my whole life, and have built up
a huge body of work, and finally
I get asked to show out in New York, and it’s for urine drawings,
it doesn’t get more artfag than that.
I’m king of the artfags.
And I’m excited and I just can’t hide it.
My friends at VICE magazine who have supported me , published my
photo’s, artwork, and articles
from the days when I had nothing
Are sponsoring this event next week. It is beyond x-rated ,so keep
that in mind if you’re gonna get
upset. I don’t wanna hear it later.

some of the drawings will be for sale between $500 to $2000, but
some of the art, that got me
through the especially hard times
I think I’m gonna have to hold on to. I hope to see all of you out
there. I’m getting on a plane tonight
to set up the show
All next week. I want to make a prison zine to hand out at the
opening, if anyone has an office job in
manhattan and has
Access to Xerox machines, I could use a sponsor for that, I’m only
gonna make 50 to 100 zines. Here
come the paper cuts.
First come first serve.

For everyone in L.A. I finished a mural for heidi Fleiss
On cahuenga between sunset and Hollywood, it’s right next to the BBQ joint
You can’t miss it.

Also in the whole month of may, I will be heading out to a country
I been avoiding most of my life.
FRANCE.
I’m older and a little bit more mature so I think I might be ready.
I’m flying out with upperplayground
5024SF.
Old partner in crime sam flores will be painting everywhere in
Barcelona, and I’m gonna cover Paris
with one of the best
Artists in the universe Herbert Baglione. If you’ve never heard of
him http://www.herbert.ind.br/
I’ve been checking his shit out for years, so getting a chance to
paint with him should be fresh. Only
roadblocks I see
Are, I don’t speak a word of French, and Herbert only speaks
Portuguese, which I don’t speak a word
of either, but I’m not worried art
Is the tool that gets me over many and all bridges from Japanese
jails to African pygmies. But if any
of you out there know any
Helpful phrases in either language that would be much appreciated.
What should I do while I’m out
in France?
From france I’m gonna head out to the middle east and hopefully
not get myself killed.
Everyone be good. See you all soon.
Until nextime
I continue to run from myself. God bless.

If you didn’t read this yet, here’s a snapshot of what I’ve been up
to this past year in one day. “.... David Choe