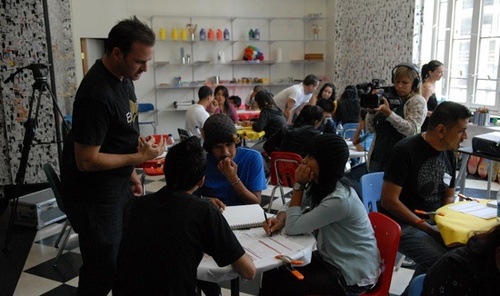 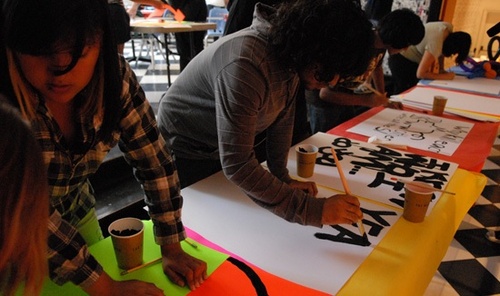 While in Washington DC last week we had a chance to catch up with Aaron Rose, founder of the legendary Alleged Gallery in New York and co-curator of the groundbreaking museum exhibition “Beautiful Losers.” Over lunch Aaron gave us a sneak peek of “Make Something!!” an absolutely amazing educational initiative that he’s been quietly developing with Kanye West.

When the new “Make Something!” studio formally opens in Los Angeles later this year, it will definitely be the coolest after-school program in the world.  Bar none.

Based on the DIY “Do It Yourself” culture that has driven so much of the creativity in skateboarding, surfing, punk, hip-hop, and graffiti, “Make Something!” has the potential to completely re-invent how art and creativity is taught to school kids.

Kanye West explains it quite well:

“I believe every child is born an artist. That ability to express ourselves freely is inherent in every child, whether it’s through singing, dancing, drawing or playing. Somehow as we get older society and culture dampen that spiritmaking us self conscious about expression. I believe Programs like Make Something!! help to keep this creative spirit alive as well as show kids that being an artist is a viable career path.  As public funding for schools and artsprograms continue to be cut,  programs like Make Something!! are critical to breeding future generations of artists who can contribute to the greater cultural fabric that keeps America forward thinking and progressive.”

Aaron also explains: “I was one of those kids who absolutely hated school. I always felt that I didn’t quite fit into the education system as it was and yearned to find a place to belong. I started the Make Something!! program to be a home for kids who feel as displaced in school as I did.  Last summer, when we first started the Make Something!! workshops we had no idea that they would have the effect that they did. Our original concept was simply to hold ten workshops that exposed a small number of kids to DIY (do-it-yourself) ethics. Since then the program has grown exponentially, beyond my wildest dreams. Seeing the looks on kids faces when they actually accomplish something that they never thought possible has been one of the greatest rewards of my professional career.

So far Make Something!! workshops have exposed more than fifteen hundred kids to DIY principles.  The full curriculum will include spectrum of artistic pursuits including visual arts like painting and drawing, cinematic arts like film production and editing, and fashion and music. Some of the artists who Aaron has lined up for “Make Something!!” include Barry McGee, Spike Jonze, KAWS, Kanye West, Chloë Sevigny, Jeremy Scott, and Terry Richardson.

When we were in Washington, Aaron said he has “come with an agenda”.  For us, it was awesome to see that Aaron was taking all the learnings from the amazing things he’s done, as well as all the connections he has, and focusing them now on children’s education.

We can’t wait to see what Aaron does with “Make Something!!”