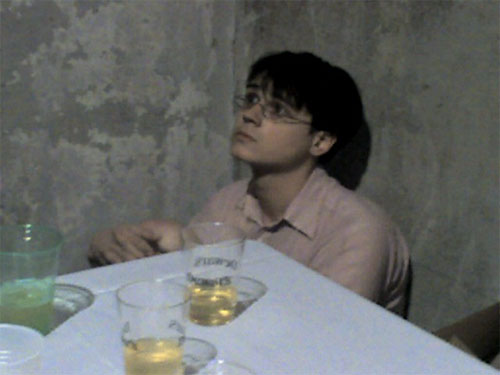 By taking his desire for attention to a new level, has the “Splasher” actually been caught tonight while trying to sabotage Shepard Fairey’s high profile opening in Brooklyn?

Here’s what went down a few minutes ago:

Two young guys entered Shepard Fairey’s opening night party at 81 Front Street in Dumbo with a backpack. Moments later they were seen attempting to light a homemade stink and smoke bomb that was hidden in a coffee can.  As they were setting it off, two guys nearby saw what was happening and managed to stop the guys from igniting it before it went off. Seeing the scuffle, the security guys hired for the evening caught one of the two guys (shown above) while the other was able to get away.

So as we write this the police are now detaining the guy as they figure out what, if any, charges to file.

So why might this be connected to the Splasher?

For the last few weeks speculation has been circulating amongst the art community here that is was the Splasher who lit off a similar stink bomb at the Faile show a few weeks back in Nolita.  Going beyond it just being a practical joke, the guy who lit the stink bomb then called the police informing them that there was a gas leak in the building. Minutes later fire engines arrived and the show was cleared out.

One thing seems clear - there are two motivations that have been driving the Splasher.  Attention and a jealous desire to sabotage and ruin the work of well known artists who have gained a certain amount of notoriety. It then makes sense that after gaining a ton of press over the last few weeks, that the Splasher would try to take things to another level by not only ruining the artwork on the streets of people like Faile and Shepard, but by getting even more attention for ruining their gallery shows as well.  Since it would be all too obvious to walk into an art show and throw paint on the wall, why not then attempt to close down the show by causing a panic?

Obviously at this point we don’t know if the guy above is indeed the Splasher. But in the next couple of hours we expect that now that a photo has been shown of the guy caught tonight for trying to sabotage Shepard’s show, that more of the story will come out.