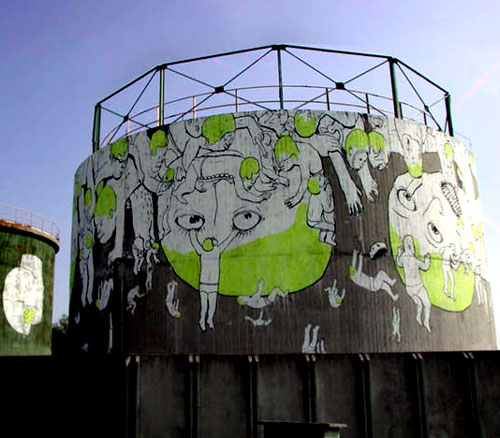 If you’ve spoken to Sara and I in the last six months, then you’re already aware that we can’t stop talking about Blu. Why we try not to play favorites, Blu is hands down our favorite artist currently hitting the streets.

Later this month Blu will be leaving his home base in Italy to spend two months traveling across Central America with two film directors Lorenzo Fonda and Ivan Sibe.  They will be making their way across Mexico, Guatemala, Nicaragua, Costa Rica, and ending in Buenos Aires, Argentina meeting artists, painting, and searching for the best murals in each country. The film makers will be shooting everything and then they will make a documentary film about the whole project.

To track the progress of the project, they’ve put together a blog where you can “read the news and look at the photos of these four lost italians trying to survive in central America.”

Also, this week Blu updated his website.  So if you’ve never seen the work of Blu, or haven’t checked out his stuff in a while, cancel what you had planned for the next couple of hours and check out the amazing work that this guy does by clicking here.