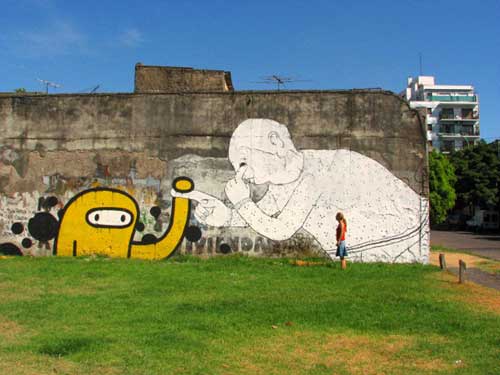 There were many artists who we wanted to be a part of Wooster on Spring, but because of budget (the lack of) or logistics (difficult ones) it wasn’t possible for them to come to New York.

The biggest disappointment for Sara and I was that Blu, one of our favorite artists working on the streets today, couldn’t make it. We had met Blu at the beginning of the year in Milan (the same day we met Rekal) and desperately wanted him here.

Blu had a good reason for not coming.  For the last month or so he’s been traveling across South America with a documentary film crew creating massive murals with local people along the way.  If there is one website that you should be reading each day, even more than ours, it is this one.

But here’s what type of person Blu is - The night before the opening of 11 Spring my mobile phone rang. It was Blu. How he got my mobile number I don’t know.  He said he was in Argentina and that he wanted to personally say congratulations to all of the artists and that he was excited for them and that he missed them a lot.  This meant a lot to me as it’s not something that most people do.

The photo above came this morning from our friend Julian who’s part the DOMA collective in Buenos Aires. It’s a collaboration done in the last few days between DOMA and Blu.