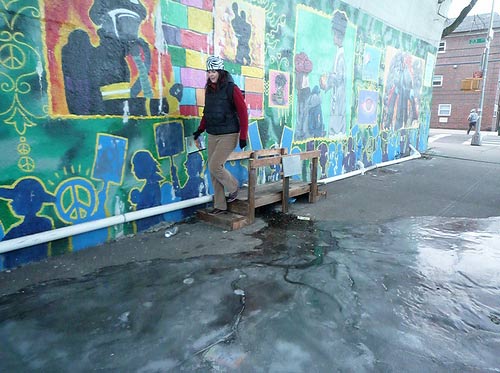 For several years, a leaky pipe on 33rd Street beneath the Hell Gate Bridge viaduct approach has submerged more than a hundred square feet of heavily-trafficked sidewalk under a festering cesspool of standing water. Astoria Scum River, as it’s called, stretches the entire width of the sidewalk, and as winter approaches, the river ices over and becomes particularly hazardous to cross.

Astoria Scum River Bridge was constructed to offer Astorians an opportunity to safetly cross this hazard. The unauthorized bridge is a gift to the pedestrians of Astoria in the absence of successful municipal efforts to ameliorate the problem.

The bridge was made at zero cost entirely from recycled materials: an old work bench found on the curb, rescued screws from a disassembled desk, and a metal plate from an expired electrical component. It was installed and dedicated on December 30th, 2009.

On January 25th, 2010, Astoria Scum River Bridge was the subject of a commendation from the office of NYC Council Member Peter F. Vallone, Jr., accompanied by a pledge to work with Amtrak to re-route Astoria Scum River off the sidewalk.

The bridge remains in place as this work progresses.