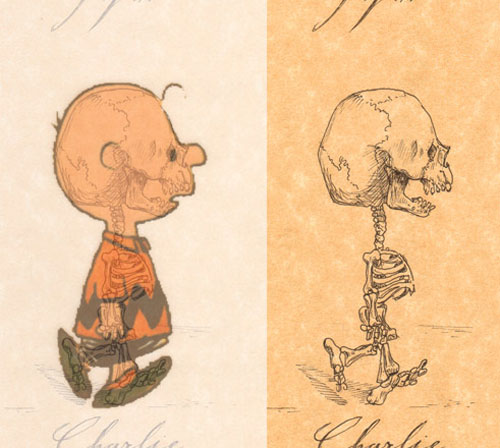 The artist Michael Paulus recently took 22 of the most iconic cartoon characters from children’s television in the 60’s and recreated (or more to the point, established) their skeletal systems.

The results are absolutely fascinating.  Michael writes on his website…

“Animation was the format of choice for children’s television in the 1960s, a decade in which children’s programming became almost entirely animated. Growing up in that period, I tended to take for granted the distortions and strange bodies of these entities.

These Icons are usually grotesquely distorted from the human form from which they derive. Being that they are so commonplace and accepted as existing I thought I would dissect them like science does to all living objects - trying to come to an understanding as to their origins and true physiological make up. Possibly to better understand them and see them in a new light for what they are in the most basic of terms.

I decided to take a select few of these popular characters and render their skeletal systems as I imagine they might resemble if one truly had eye sockets half the size of its head, or fingerless-hands, or feet comprising 60% of its body mass.