Like so many others, for years we’ve been obsessed a building in our neighborhood which we refer to as “the candle building.”  If you’ve put your stuff up in Manhattan, then you are probably familiar with the building, as over the years it’s become an outdoor museum for street art with artists from all over the world contributing.

Last Sunday the New York Times ran a piece about 11 Spring Street, and since the building is so easily recognizable, we thought we’d pass it along. 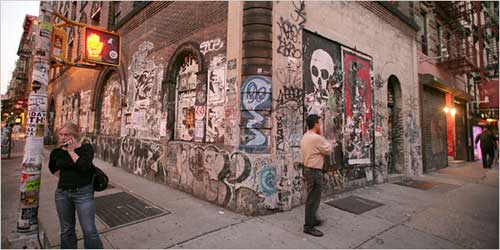 Neighborhood Mystery
Ghosts Amid the Graffiti
By STEVEN KURUTZ

THE five-story, 19th-century brick building at the corner of Elizabeth and Spring Streets may be the best-known unknown building in New York. It is not designated as a landmark, it has no official name, and it is referred to only by its address, 11 Spring Street, or simply as “the building in NoLIta with all the graffiti on it.”

Yet 11 Spring Street is known worldwide as a mecca for street artists, some of whom have covered its sooty facade with a pastiche of graffiti and poster art. It is the subject of a poem that the singer Lou Reed recited on an album by a Danish band called Kashmir, and the London-based artist D*Face proposed by writing the words “Eve B, will you marry me?” on one wall.

The building, a boarded-up palazzolike structure, has elegant archways, an intricate stone carving of two horses that repeats along the building’s northern edge, and a garage door that remains ominously shut. It also has many local admirers, who have long speculated about who owns it, what it’s like inside and why, in a neighborhood like NoLIta, where a one-bedroom apartment rents for $3,000 a month, it sits vacant.

“I’ve been obsessed with that building for years,” said Jen Bekman, who owns an art gallery across the street.

Ms. Bekman often compares notes with Lockhart Steele, who runs the real estate Web log Curbed and also counts himself as a fan of the mystery building. “I used to think it was my own private fascination,” Mr. Steele said. “In a decade when real estate in New York has been so ascendant, it’s unique to find this massive building not being put to any particular use.”

Over the years, the building has become the New York equivalent of the spooky suburban home with the chipped paint and weedy lawn. The curtains and lighted candles that for years adorned the upper-story windows only added to the haunted-house aura. Some wonder if the interior is full of bizarre mechanical gadgets, an architectural version of the game Mousetrap. Others say there are no stairs, only ramps. “I heard it was an icehouse, where the mob kept bodies,” Mr. Steele said.

Whatever the truth, 11 Spring Street evolved into an unforgettable local attraction.

“Over time, a lot of international artists would come and put up a piece,” said Marc Schiller, whose Web site, Wooster Collective, documents ephemeral art. “Because it was never cleaned, these posters and stencils would collect. It became an outdoor museum for street art. It became a destination.

“You could meet people from Barcelona to Tokyo to Sao Paulo who know that building,” he went on. “That building, by circumstance, has become a focal point of a movement of public art.”

A few weeks ago, one of the mysteries surrounding the place was solved when Corcoran Real Estate Group, which had been listing the building for sale, noted on its Web site that 11 Spring Street had been sold. It was purchased by a firm called Elias Cummings Development, which plans to transform it into condominiums, with construction to start in a month.

With the sale of the building, its past is poised to become public. And that past is a rich and complex one.

Eleven Spring Street was built in 1888 as a carriage house and horse stable, and for years was equipped with ramps instead of stairs. The owner most strongly associated with the building was a theatrical set designer named John Simpson, who bought it in the 1970’s, lived there alone and tended to the curtains-and-candles display.

According to the photographer Jay Maisel, who lives a block away at 190 Bowery in another graffiti-covered, mystery building, and Edward Asfour, an architect who later worked on 11 Spring, Mr. Simpson was an eccentric man taken with the idea of mechanization. He outfitted his space with all sorts of primitive but ingenious gadgets, creating quarters that called to mind those of a downtown Da Vinci.

When someone entered the bathroom, for example, and turned on the light switch, a window shade dropped and a transistor radio turned on. A push of a button lowered a soap tray; a push of another button dispensed two sheets of toilet paper. At work stations around the building, Mr. Simpson kept a set of drills, so that no matter what floor he was on, he was never without a tool.

ONE day a few years ago, Mr. Maisel saw all of Mr. Simpson’s creations appear on the sidewalk, followed by Mr. Simpson. “I asked him what was going on,” Mr. Maisel recalled, “and he said: ‘I sold the building. I’m walking out with just the clothes on my back.’ ”

According to Mr. Maisel and others, Mr. Simpson is said to be in Italy somewhere; attempts to locate him for this article were unsuccessful.

In 2003, Mr. Simpson sold the building to Lachlan Murdoch, son of the media baron Rupert Murdoch, who planned to transform 11 Spring Street into a spectacular single-family residence, with a lap pool in the basement. Last year, when the son returned to his native Australia, the building again languished.

The new owners are Caroline Cummings, who comes from a family of developers, and Bob Elias, a Palm Beach developer. They plan to convert the building into a three-unit condominium.

One recent afternoon, Ms. Cummings and her project manager, Malcolm Stevenson, offered a tour of the interior, which has been stripped down to the wood studs and, given its equine past, appears pleasantly barnlike.

The developers plan to restore the facade — so sooty that the poem Mr. Reed read was titled “Black Building” — to its former glory. As for the building’s role as a global street art museum, Ms. Cummings, who holds a degree in art history from New York University, is uncertain but said, “We’re sensitive to the street-art issue.”

Ever since the announcement of the sale was posted on the Internet, there has been no shortage of visitors curious about the building’s fate, especially the day Ms. Cummings and Mr. Stevenson conducted an impromptu tour for a reporter.

“What is this building?” demanded Jasna Radonjic, a music publisher who lives nearby. “Tell me. I’ve always wondered.”

Informed that it had been a carriage house and would soon be condominiums, Ms. Radonjic offered a design suggestion. “I hope you keep the candles,” she said.