As we celebrate our 10th Anniversary of the Wooster Collective website. we asked a group of artists who we showcased in the beginnings of the website the following question:

The following response comes from BO130... 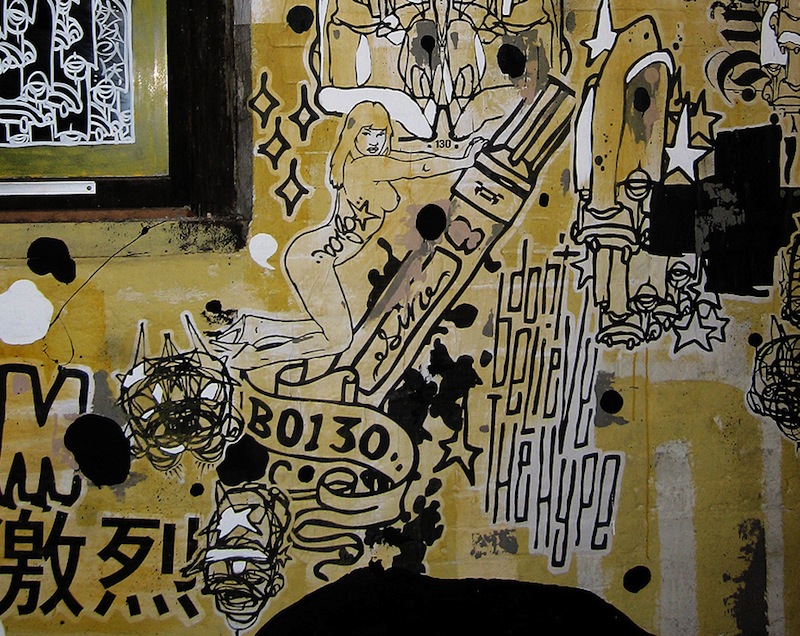 "The learning process, as we all know very well never ends.

The things I've learned in the last ten years, are many.
Speaking of our artistic sphere especially, every day I learn new things and I question the old ones.
However, things that I wish someone had told me 10 years ago are really not many.

During these years I have been told many things
and in many ways, I have to say, I am very happy I did not listened to them

Often. I have been given advice and opinions on how to proceed in my career
...and don't get me wrong, I find this very useful and I'm always interested to hear other people's experiences and advice.
At the same time, keeping in mind what I was told, I have always preferred to find my way in things,
and if nothing else, I've always had the need to try it for myself to make my own opinion.
Sometimes I was wrong but I was always ready to change my point of view and it happened a few times.
Many other times, however, my intuition was right and even though at the time seemed absurd and wrong, time has proved me right.

Probably this has happened, thanks to the strong values ​​that were given to me by my family, good friends and my life experiences over the years.

I never chose the easy way, I never made ​​choices based on money, fame and notoriety, I never believed the hype.
but instead, I decided to follow my values​​, my heart and my passions trying to compromise as little as possible and stay true to my beliefs.... and Havin' Fun!
These are things that I learned a long time ago and they will stay with me for the rest of my life.

For sure ten years ago, if someone had told me that in ten years time I would need ....
to post photos of my work, daily, on dozens of sites, blogs, tumblr, facebook, twitter, instagram, etc, etc...
...to paint in festivals for free, (only in big scale, only building facades, only with the cherry-picker --- forgetting the streets)
and in galleries walls and canvasses for lots of money.

if someone had told me that "streetart" would become so popular and trendy that everyday we would have a new self proclaimed artist,
and anything made with some drips and badly drawn characters, stencils and paste-ups would be considered street art
even if the person who did it, never did anything in the street...

if someone had told me that galleries would choose to represent people ... just because!
Without knowing what's going on,  who's real and who's fake,
who's copying and who's original,who's meaningful and who is irrelevant,
who gave something to this movement and who just took advantage on a situation.

Apart from the economic speculation, the superficiality of some people
and the sly smart ass who think they can make easy money out of all this (these will not last for long) ...
One thing is positive....
muralism, graffiti, streetart, are constantly evolving, changing and inspiring
what is true today may not be true tomorrow but for sure it's an ongoing process,
by now, they are part of our popular culture and hopefully they will play a even more relevant social role in the future.

From when I started in 1985, many things have changed and many more will change.
The important thing is to know the history to avoid the same mistakes and keep an open mind for what lies ahead.
What I'd like to see once again, it is a greater unity between the artists like there was ten years ago and less dependence on the art market." ... BO130